Association of Parks in Bulgaria » Parks » 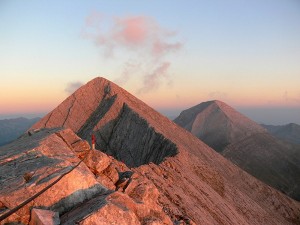 There is no other mountain in Bulgaria, which influences in such a powerful and bold way the human eye. The marble giant peaks, the circus abysses and the emerald eyes of the lakes, the stars of the edelweiss, the whisper of the white firs and the song of the rivers make the memory of the Prinin Mountain unforgettable.

More than 2000 years ago the Thracians named the mountain Orbelius – the Snow Mountain. Later on, the Slavs named it after their god of storms and thunders – Perun – a name, which has been slightly changed nowadays to Pirin. The main ridge of the mountain goes from northwest to southeast and is about 35 km long. In the north the “Predela” connects the mountain chain with Rila Mountain, in the south Pirin borders with Slavjanka Mountain, in the east with the river Mesta and in the west with the river Struma. The pass leading to the town of Gotse Delchev along the Popovi meadows divides the mountain into two parts – Northern and Central Pirin and Southern Pirin.

In the most beautiful part of the mountain, which is also a well developed tourist destination, between the regions Predela and Todorova poljana, covering an area of 40332.4 ha is situated the National park Pirin. It was proclaimed as a National park in 1962. At first it was named Vihren and covered an area of 6212 ha and after that it expended several times. In 1974 it was renamed to Pirin. Since the adoption of the Act on protected territories the park was given a statute of a national park.

Typical for Pirin Mountain are the Alpine type glacier forms. Millions of years nature has sculptured the pyramidal and cone peaks Vihren, Kutelo, Muratov, Baderishki chukar and Kamenitza and the circuses Popovski, Vasilashki, Baderishki, Demjanishki and the narrow, sharp ridges between them, with specific names – the Horse, the Guards, the Ears. In the northern part of the mountain, where the basic stone is marble, in the circuses’ beds are formed numerous abysses, caves and pot-holes. In the park there are 50 marble and granite peaks which are 2500 meters above the sea level and Vihren – taking the third place among the highest peaks on the Balkan Peninsula with its 2915 meters, towers above them. From the cliff ridges to the valleys the mountain is furrowed by 35 small and big circuses. At the foot of the peaks which are between 1260 and 2720 meters high, there are more than 180 circus lakes. The biggest groups of lakes are Badarishki, Vasilishki, Strazishki, Todorini, Valjavishki, Popovi, Kremenski, Prevalski, Polenski and Vlahini. The rivers flow in two basic directions – the left feeders of the river Struma flow west and southwest, the right feeders of the river Mesta – east and southeast.The combination of relief and climate conditions make Pirin the most dangerous mountain in Bulgaria because of the avalanches. In 1984 in the region of Cherna livada (Black meadow) fell the biggest avalanche – 700 000 m3. Extremely dangerous was the avalanche which started from Bezbog peak – in 1971 it destroyed the mountain hostel Bezbog. Today the new hostel is built at a safer place. Along the karst ridges the vegetation is scarce but there can be seen the wild goat and the rare edelweiss. The lower belt of the mountain comprises of evergreen forests of spruce, silver fir, Scots, Austrian, Macedonian and Bosnian pine. They give shelter to deer, stags, wild boars, bears, wolves, Capercaillie and other forest animals. There are numerous nature and historic landmarks in the park – near the hostel Bandaritza, an ancient tree, called Baikusheva mura (Bosnian pine), which is 1300 years old, the Wonder tree at the Trionska meadow, the ancient Macedonian pine called Candlesticks in the region Bjala reka (White river), numerous waterfalls and caves.

On the territory of the park there are two reserves – Bajuvi dupki – Dzindziritza (2873 ha) and Julen (3156.2 ha). Bajuvi dupki – Dzindziritza Reserve is one of the oldest reserves in Bulgaria. It was proclaimed a reserve in 1934 aiming at preservation of the natural relict forests of Macedonian and Bosnian pine and the great diversity of flora and fauna. In 1977 it was registered as a biospheric reserve. The Julen Reserve was proclaimed in 1994 and plays an important role for the preservation of the ancient forests of Macedonian pine, scots pine, spruce, silver fir and mauntain pine. Most of the plants in the reserve are registered in the Red book of Bulgaria – globe flower, lion’s foot, Pirin poppy, columbine golden, etc.

Thanks to its unique nature National park Pirin is acknowledged as part of the world heritage and in 1983 was included in the lists of the Convention on protection of the world cultural and nature heritage.

The directorate of the park is situated in the town of Bansko. Aiming at more efficient management and protection, the territory of the park is divided into five parts with offices in the towns of Bansko, Razlog, Dobriniste, Kresna and Sandanski.